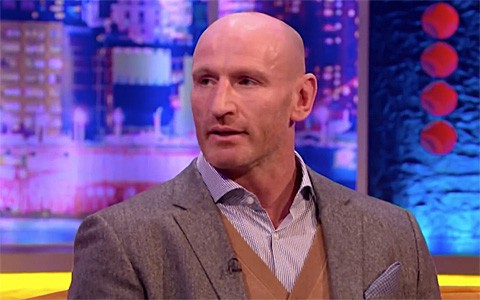 Welsh rugby legend Gareth Thomas was greeted with cheers on The Jonathan Ross Show in the UK last night in conjunction with his new autobiography, Proud.

Thomas talked about how he lived a lie for so long and how damaging it is to a person and those around them. He also spoke about how he couldn't have come out and continued to play rugby at a young age because of the abuse he would have had to endure, and how that continues in sport, particularly football.

"I didn't come out because I wanted to be the first person to do it. I came out because I came to the crossroads of living or dying, and that's why I decided to come out. Because I wanted to live. I get stopped, even today, constantly on the street by people I have never met in my entire life, and they'll say to me, 'I Just want to thank you for helping my brother, mother, father, sister, auntie, uncle, because you gave them the strength to be who they want to be…I have won every trophy that I can ever dream of winning but when you affect somebody’s life, in a way that this person is going to have a life that they never thought they could have because of me, stupid old me, because of that they could do that, it’s amazing."

Thomas also talked about the difficulty of telling his former wife Gemma that he's gay.

Watch his powerful interview, AFTER THE JUMP…

As we reported recently, Thomas is the subject of a stage play that is in development, and an upcoming film starring Mickey Rourke.

Previous Post: « CNN Looks at America’s Closeted Workforce and the Need for Nationwide ENDA – VIDEO
Next Post: A Sexy Reminder to Turn Your Clocks Back: VIDEO »