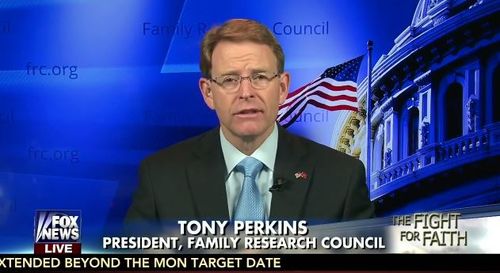 FRC hate leader Tony Perkins recently had a chat with Fox News correspondent Tucker Carlson about Perkins' visit to the Vatican last week for the Pope's discussion on the state of marriage and the family. Perkins was joined at the summit by a number of other anti-gay Christian leaders, as well as representatives from 13 other religions.

Hoping to quash any rumblings that the Pope was changing his tune on marriage, Perkins said in part:

"The Pope was very clear on this, that children have a right to grow up in a home with a father and a mother…Marriage and family are in crisis. And that's not just an American problem, it's a global problem. And so we have a responsibility to do something to give the best possible environment for children to grow up in and that's a mom and a dad…This is not just an issue for the church. We had 14 different religions – taoism, jainism, all these different religions that don't have any theological elements in common, but they have a common understanding of what marriage is because it's rooted in nature. It's rooted in the order of creation."