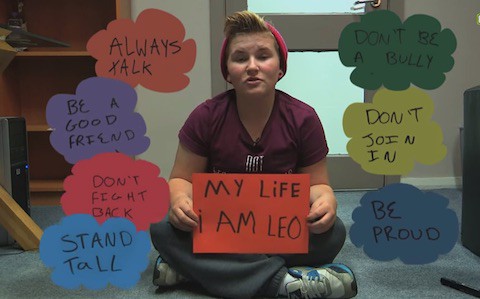 ‘I Am Leo,’ aimed at 6- to 12-year-olds, will air this afternoon as part of the CBBC’s anti-bullying week.

The short film follows 13-year-old Leo, born Lily, who has lived as a boy since the age of 5 and legally changed his name when he was 11.

“I had wanted to do a story on a transgender child for a while, because I know there are kids out there having a tough time. But up to now, we hadn’t found the right story to tell.

“It feels very much like [Leo’s] journey and story, as told by him. It’s not about the science or the medicine, it is fundamentally about identity and passion – about a boy taking a stand, saying ‘This is who I am’. He has an identity that others find tricky to accept. That’s a pretty universal story.”

“The great thing about making documentaries like this for children is that they’re not born with prejudices. There is a risk that the BBC will be criticised for commissioning this film, but it’s important that CBBC has been so supportive of it.”

Watch Leo’s inspiring “Tips For Coping With Bullying,” AFTER THE JUMP…

Previous Post: « One Direction, Sam Smith, and Others Team Up to Tackle Ebola in ‘Do They Know It’s Christmas?’ – WATCH
Next Post: Andy Cohen Dishes on How He Pissed Off Barbara Walters While Co-hosting The View: VIDEO »