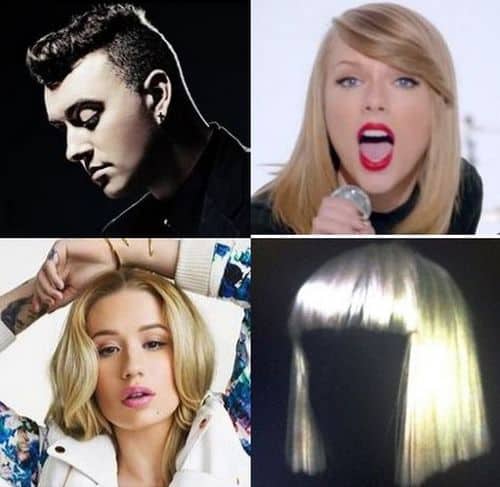 The 57th annual Grammy nominations are in.

See who made the cut, AFTER THE JUMP…

Out British singer Sam Smith managed to tie with Beyonce and Pharrell Williams as the most-nominated aritsts of 2015, with six nods each. Joan Rivers earned a posthumous Grammy nomination for her memoir Diary of a Mad Diva.

Album of the Year

Record of the Year

Song of the Year

"This Is All Yours" by alt-J
"Reflektor" by Arcade Fire
"Melophobia" by Cage the Elephant
"St. Vincent by St. Vincent
"Lazaretto" by Jack White

"American Kids" by Kenny Chesney
"Automatic" by Miranda Lambert
"Give Me Back My Hometown" by Eric Church
"I'm Not Gonna Miss You" by Glen Campbell
"Meanwhile Back at Mama's" by Tim McGraw ft. Faith Hill

"Never Say Never" by Basement Jaxx
"Rather Be" by Clean Bandit ft. Jess Glynne
"F for You" by Disclosure ft. Mary J. Blige
"I Got U" by Duke Dumont ft. Jax Jones
"Faded" by Zhu

"American Hustle"
"Guardians of the Galaxy"
"Frozen"
"Get On Up: The James Brown Story"
"The Wolf of Wall Street"

"We Exist" by Arcade Fire
"Turn Down for What" by DJ Snake & Lil Jon
"Chandelier" by Sia
"Happy" by Pharrell Williams
"The Golden Age" by Woodkid ft. Max Richter

"Fly Rasta" by Ziggy Marley
"Full Frequency" by Sean Paul
"Back on The Controls" by Lee 'Scratch' Perry
"out of Many, One Music" by Shaggy
"The Reggae Power" by Sly & Robbie & Spicy Chocolate
"Amid The Noise And Haste" by Soja

"Actors Anonymous" by James Franco
"A Call to Action" by Jimmy Carter
"Carsick: John Waters Hitchhikes Across America" by John Waters
"A Fighting Chance" by Elizabeth Warren
"Diary of a Mad Diva" by Joan Rivers
"We Will Survive: True Stories of Encouragement, Inspiration, and the Power of Song" by Gloria Gaynor

"Gimme Something Good" by Ryan Adams
"Do I Wanna Know?"by Arctic Monkeys
"Blue Moon" by Beck
"Fever" by The Black Keys
"Lazaretto" by Jack White

"Islander" Bernhoft
"Lift Your Spirit" by Aloe Blacc
"Love, Marriage & Divorce" by Toni Braxton & Babyface
"Black Radio 2" by Robert Glasper Experiment
"Give The People What They Want" by Sharon Jones & The Dap-Kings