Possibly sensing they are a dying breed gasping their last breath of hate, anti-gay religious right wingnuts are increasingly comparing their embattled selves to victims of ISIS.

Latest to the game is Bill Donohue of the Catholic League who earlier this week unveiled a Christmas billboard in Los Angeles that draws a comparison between the experiences of American “Christians” – the ones who spend their lives spreading anti-Christian messages – and Christians facing persecution in ISIS-controlled territories. 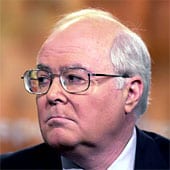 Full of Christmas spirit, Donohue also makes it clear that gay people who refuse to take abuse from the religious right in silence are in fact the intolerant ones.

According to Right Wing Watch, in a statement, Donohue said that the billboard is aimed at Hollywood:

“No, the Hollywood moguls who disrespect Christians are not the same as radical Muslims who behead us, but both are full of hate. Moreover, both need to be challenged. Christians are fed up with the barbarians abroad and the bigots at home. It’s time all these bullies learned to practice the virtue of tolerance and the meaning of diversity.”

Happy Christmas to you too, Bill.

Donahue has also excused himself from next year's New York St. Patrick's Day Parade following the decision to allow one corporate LGBT group to participate.

Watch the perennial moaner whine about St. Patrick's Day, AFTER THE JUMP…