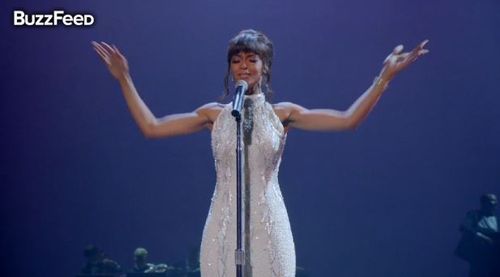 Whitney, Lifetime's upcoming television movie about the tumultuous life of Whitney Houston, has a debut trailer out now. The film stars Yaya DaCosta as the titular singer and is directed by Angela Bassett.

Buzzfeed writes the film "chronicles Houston’s life from church choir in Newark, New Jersey, to the heights of global superstardom. But, as her fans have come to know all too well in the wake of her tragic death in February 2012, there was another, darker side to the singer…"

Here's hoping it's better than Liz and Dick. The film airs January 17.

[via Pink is the New Blog]

Previous Post: « Lexicon Valley Explores the Origins of the ‘Gay Voice’ – LISTEN
Next Post: Gay UK Doctor Commits Suicide After Coming Out To Disapproving Mother Who Told Him to Get ‘Cured’ »