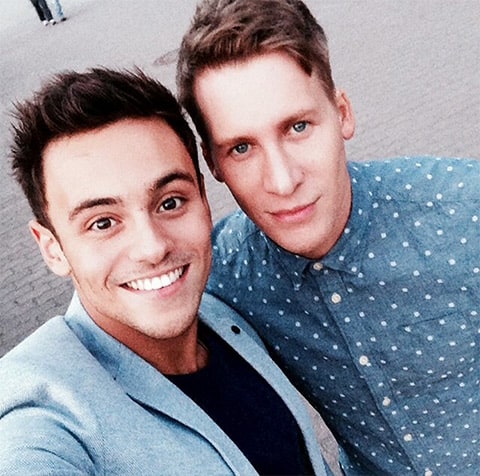 A year ago today, British Olympic Diver Tom Daley came out publicly in a video in which he confessed he was bisexual (he would later go on to clarify that he now identifies as gay) and dating a man, his much-talked-about beau, Academy Award-winning screenwriter Dustin Lance Black. Said Daley at the time,

"Come spring this year my life changed massively when I met someone and they made me feel so happy, so safe, and everything just feels great – and well that someone is a guy. And it did take me by surprise a little bit. It was always in the back of my head that something like that could happen but it wasnt until the spring of this year that it clicked, felt right. Like I said, my whole world just changed, right there and then. And of course I still fancy girls but right now I'm dating a guy, and I just feel safe, and it really does just feel right. Is it a big deal? I don't think so."

Today, the out Olympian took to Twitter to celebrate the one year anniversary of his coming out, tweeting, "1 year today! [Rainbow emojis] oh how time flies!" Congratulations, Tom on your first anniversary!