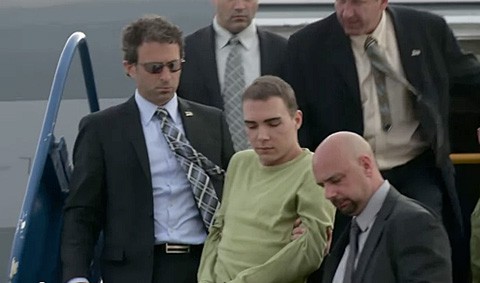 The Quebec Superior Court found Canadian gay adult film actor Luka Rocca Magnotta guilty of first degree murder, among four other related charges, and sentenced to life imprisonment with no chance of applying for parole for 25 years for the brutal dismemberment and shocking murder of Chinese student Lin Jun reports Global News. Lin Diran, the father of Lin Jun, was present at the trial for the verdict while the rest of Lin's family lives in China. Lin Diran read an emotional statement after the conclusion of the trial.

"In one night, we lost a lifetime of hope, our futures, parts of our past. We do not want to tell our story because it is too sad to repeat. We cannot talk much about Lin Jun without talking about his murder. The murder has robbed us not only of Lin Jun but our ability to think and talk about him without feeling pain and shame."

Magnotta did not testify throughout the duration of the trial. Several defense psychiatrists testified Magnotta was schizophrenic and was in a state of psychosis when he killed Lin; others, testifying for the prosecution, said Magnotta had a personality disorder, with some citing his narcissistic behavior, and had the capacity to know the difference between right and wrong. The macabre nature of the crime made news around the world, with the story of Magnotta recording his murder of Lin Jun and mailing one of Jun's feet to Prime Minister Stephen Harper, while scattering the rest in public around parts of Canada is straight out of a horror movie. Magnotta's violent history began when he recorded himself on video killing kittens and posting the videos to the web. In 2010, an animal rights group connected Magnotta to the videos however, Magnotta spoke with the British tabloid The Sun, denying his involvement in the killing of the animals.

Magnotta also claimed he was dating Canadian serial killer Karla Homolka who, along with her husband, raped, murdered and tortured three school children including Homolka's younger sister. In May 2012, Magnotta kidnapped Jun and another man (whom he later let go), and videoed himself murdering Jun with an ice pick, which appears to be a sick homage to "Basic Instinct," and later committed necrophiliac acts on Jun's body. Magnotta posted "teasers" of the killing to the web calling the act, amongst others, "1 Lunatic, 1 Ice Pick."

After the mailings, Magnotta fled to Europe. In June 2012, a patron at a Berlin internet cafe recognized Magnotta, who was reading articles about himself on one of the computers, and called the police who arrested the deranged killer. At the conclusion of the trial, Magnotta did not apologize, or express remorse, about the killing to the court or Jun's father. Quebec Superior Court Justice Guy Cournoyer thanked the jury for performing their duties, especially after being subjected to horrifying video and image evidence of the crime.

"We’ve asked a lot of you and you rose to the occasion and indeed proved that real and substantive justice is a reality in action. While it may not always be obvious to everyone, a jury trial is one of the most unfailing tests of a civilized country."

Previous Post: « U.S. Drops The Gambia From Popular Trade Agreement Over Increasing Unjust Treatment Of LGBT People
Next Post: Kelly Ripa Grills Anderson Cooper On Whether He Wants To Sleep With Her Husband Mark Consuelos: VIDEO »