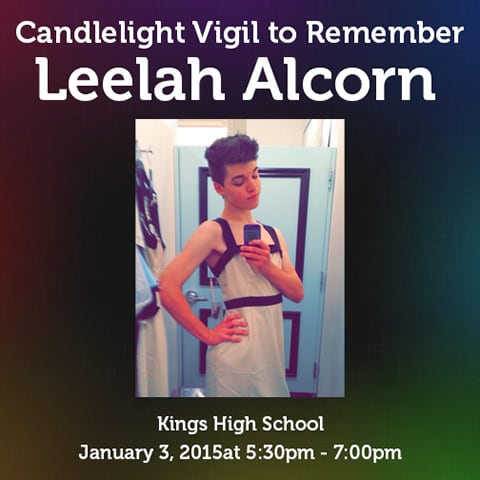 Marriage Equality Ohio has announced they will be hosting a candlelight vigil in honor of transgender teen Leelah Alcorn who recently took her own life. The vigil we be held at 5:30 PM this Saturday, January 3rd at Kings High School, which Alcorn once attended, outside of Cincinnati. Said the group on their Facebook page:

It is time for all of us regardless of our sexual orientation to stand together to remember someone we lost. Every time I see someone claim their life, I get upset. Acceptance should not be something granted to few. Acceptance should be given to everyone, we are a diverse world of people. Join us in a night to spread ACCEPTANCE and show the world we are here, and we care, and that bullying and intolerance is UNACCEPTABLE!

As we previously reported, Leelah took her own life on Sunday morning, stepping in front of a semi truck on Interstate 71. Leelah realized she was transgender when she was 14. Though she sought support from family, she received none. She posted a haunting suicide note to her Tumblr page, imploring parents not to react negatively if their child comes out as transgender, writing, "Even if you are Christian or are against transgender people don’t ever say [to someone that they are wrong], especially your kid. That won’t do anything but make them hate them self. That’s exactly what it did to me." For Alcorn, the situation sadly felt hopeless:

Alcorn ended her note with a call to action, imploring society to stop ignoring the struggles faced by trans youth:

The only way I will rest in peace is if one day transgender people aren’t treated the way I was, they’re treated like humans, with valid feelings and human rights. Gender needs to be taught about in schools, the earlier the better. My death needs to mean something. My death needs to be counted in the number of transgender people who commit suicide this year. I want someone to look at that number and say “that’s fucked up” and fix it. Fix society. Please.