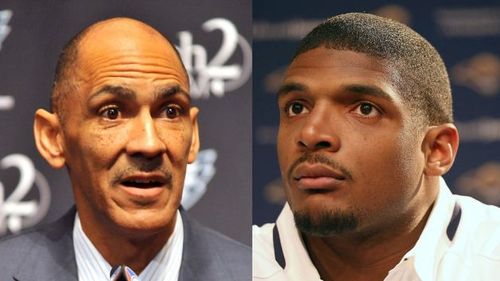 It takes a pretty big a–hole to beat out Russian President Vladimir Putin, but that's precisely what NFL-coach-turned-NBC-analyst Tony Dungy has done.

In a year when Michael Sam was by far the No. 1 gay sports story, it's no surprise that the LGBT site Outsports has chosen as its "A–hole of the Year" one of Sam's biggest detractors.

Outsports named Dungy (above left) "A–hole Of The Year" for his statement in July that he would not have drafted Sam, the NFL's first openly gay player — and for a subsequent attempt to cover up his homophobia by saying the statement was based on the fact that Sam's presence would be a distraction, not his sexual orientation.

The deeply religious Dungy's attempted cover-up was pretty obvious given his record — which includes support for an anti-gay hate group in Indiana in 2007 and a tweet last year saying he didn't agree with openly gay NBA player Jason Collins' "lifestyle."

And Dungy's argument that Sam's presence would be a distraction seems awfully hypocritical — and that much more homophobic — in light of his previous support for other NFL players including dog-killer Michael Vick and wife-beater Ray Rice.

All of which has continued to fuel speculation that Dungy's son, who committed suicide in 2005, was gay, according to Outsports' Cyd Ziegler:

It's shameful that NBC continues to give this man a platform from which he can push LGBT athletes and youth deeper into the closet. …

People like Dungy are the worst part of sports: heralded for their "fatherly" position to some players and given a pass for creating a dynamic in sports where gay athletes are driven by fear. He needlessly gives Christians in sport a very bad name, and his designation of "father figure" in the NFL gives validity to the anti-gay beliefs of others.

Watch a video in which Ziegler plays Dungy's alter ego, AFTER THE JUMP …