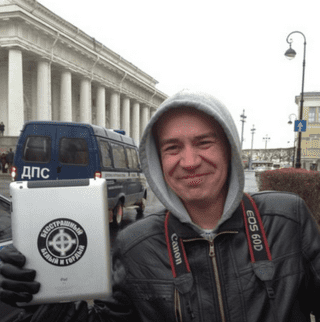 Timur Isayev, an anti-gay Russian activist, is claiming responsibility for the public outing and subsequent firing of a lesbian teacher. The outed woman was a well liked special education educator who worked with children dealing with mental and physical disabilities. Isayev took to VK, one of Russia’s most popular social networks to publish in full the letter that he wrote to St. Petersburg Primary School No. 565, where the outed woman taught:

“A teacher who isn’t afraid to make faces at the camera and put the pictures up on the Internet already ruins the ethics and kind reputation of a teacher and dishonors the school where she teaches music.

And this teacher, [redacted], doesn’t only demonstrate her personal life, but she also puts up photos of sodomy on the internet, for everyone to see. [Redacted] shows up at school with lesbian attributes: rings on her big fingers and pinky fingers, other specific jewelry, dressed like a man, cutting her hair short, which can be a bad example for the behavior of children.”

Isayev boasts that he’s outed 29 other teachers in the past for their lifestyles all under the pretense of enforcing president Vladimir Putin’s draconian “gay propaganda” law. In an interesting twist of fate, however, Isayev’s homophobic zealotry seems to have come back to haunt him. In a number of the letters he sent outing people, he made the mistake of including his actual last name, Bulatov.

Bulatov, it turns out was under investigation for having embezzled money from a previous employer. Bulatov was initially charged with a fine of 100,000 rubles (about $1,800) along with a two year stint in jail. Previously he’d managed to avoid Russian authorities, though he was picked up and detained last week for some 18 hours.