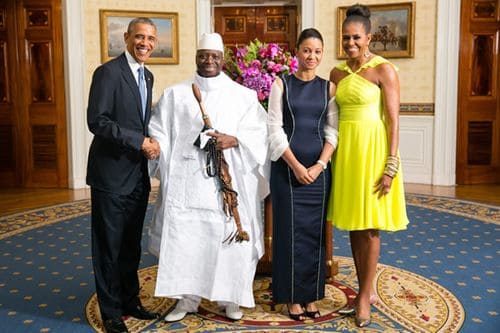 Representatives of the Civil Society Associations Gambia and other advocates for Gambian human rights gathered in Washington, D.C. last week to implore the U.S. government to redouble its supposed commitment to supporting the West African nation. In recent months there’s been a spike of Western attention that many of the activists attributed to the rise of visibly anti-LGBT sentiment within Gambia.

Officially the United States State Department has publicly condemned Gambian president Yahya Jammeh for passing a law that criminalizes “aggravated homosexuality.” The Gambian government, however, has expressed its intentions to continue its crusade against queer individuals regardless of aid cuts or retaliation from the West.

Banka Manneh of the Civil Society Associations Gambia spoke at a panel held at the Robert F. Kennedy Center for Justice & Human Rights to voice his concerns about the U.S.’s inconsistent attention. While the media attention towards Jammeh’s discriminatory laws has been well intentioned, many feel that it belies the seeming blind eye that’s been turned to other Gambian atrocities committed against non-LGBT people.

“In all these years of efforts to go to the state department, going to all these different levels in the U.S. government lobbying and lobbying for them to do something about the Gambia, we haven’t been having any traction at all,” said Manneh. “All of sudden they arrest these 15 gays and lesbians, and we’re seeing really what seems to be a firestorm.”

Jammeh’s “aggravated homosexuality” law bears a number of parallels with Uganda’s Anti-Homosexuality Act, and has similarly captured the attention of the world press for its severity. As horrific as Jammeh’s avowal to hunt down Gambia’s LGBT population may sound, however, they are not uncharacteristic of the dictator’s generally oppressive politics.

“What we are hoping is that this could be a catalyst – maybe this could be a wake up call,” Manneh said. “Maybe [the U.S. has] been asleep all this time. If this serves that purpose, that would be awesome because then it benefits the LGBT community and the regular Gambians.”