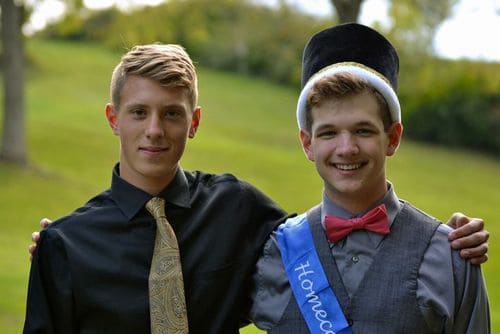 Michael Martin, an all-state soccer goalie for Musselman High School in rural West Virginia, came out of the closet to his classmates at their homecoming dance by dancing with another guy — his boyfriend Jem — who also happened to be the Homecoming King from another school. Two weeks earlier they had done the same thing at Jem's school.

Martin writes about it at Outsports:

My homecoming dance at Musselman — two weeks after the dance at Jem's school — was the big moment I revealed being gay to my school. Jem was the date of girl at Musselman and her outside guest for the dance, while I went "alone." The girl knew Jem and I were together. I was on the homecoming court, which was a big honor and something I never thought would happen. Only some people knew about me before the homecoming, so it was a shocker for some seeing me dance with another guy.

Jem and I danced all night to the most popular pop songs. But it was the slow dance that I most remember that night at the school cafeteria — "Remember When" by Alan Jackson. It was the best night ever. Jem and I got asked a lot if we were together and we said yes. "That is so cute!" some girls said. It made us felt accepted.

Word quickly spread and the following week I sensed that some guys were looking at me differently. My friends even told me people were talking about me in a negative way in different classes. "He is a faggot now," I was told some people said. My friends courageously stood up for me and I am so proud to call them my friends.

Martin also writes about coming out to his best friend, life in rural West Virginia, the general atmosphere at his school for LGBT students, and how his soccer team reacted when he told them.

Teammates were curious and I got a lot of questions. I also got teased by my teammates closest to me making jokes or saying sexual things, but I know they were just kidding. Actually, their joking told me they were OK with things. I also knew that even if someone did say something negative that a lot of my teammates would have my back. Recently I was named captain for the Musselman swim team. They all know about my sexuality and gratefully are accepting.

Martin says he was inspired by L.A. Galaxy star Robbie Rogers ("He gave me hope and confidence to be true to myself. Once he came out I started to contemplate doing the same myself and being proud of who I am."). He graduates this spring.