The parade’s organizers the South Boston Allied War Veterans Council, which in 1995 won a Supreme Court decision upholding their right to ban gay groups from the parade, yesterday voted 5-4 to allow OutVets to march in the parade scheduled for March 15th. The group has also been given permission to carry a blue banner with five white stars representing the branches of the military, and six vertical rainbow stripes. 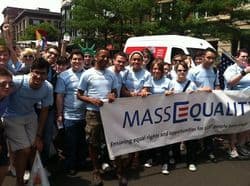 "I think it's very significant. Ensuring that there is 100 percent inclusivity is important."

Council commander Brian Mahoney added that OutVets is being allowed to march because of their military service, not sexual orientation:

"This conforms to the tenets of the parade. The parade is devoted to honoring the service of veterans. It's is our aim to honor that service and the history of the Irish Catholics in Boston. Anything that detracts from that is verboten."

This year, LGBT group MassEquality was invited to take part in the parade but the invitation was later rescinded. Boston mayor Marty Walsh refused to take part last March because of the exclusion of LGBT people. Sam Adams beer also pulled out as sponsor of the parade.

Watch Mahoney discuss his reasons for pulling out of the parade, AFTER THE JUMP…