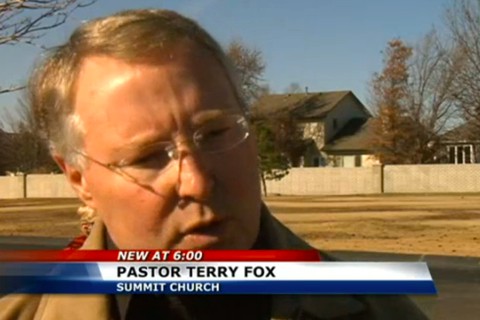 A gay Kansas man who got married on the steps of the courthouse in a public ceremony last month was fired two days later after his boss saw him on the news, according to Thomas Witt, executive director of Equality Kansas.

But Terry Fox, pastor of Wichita's Summit Church, wants to ensure that this type of discrimination remains perfectly legal. Fox is among those pushing Kansas lawmakers to revive a "license to discriminate" bill in the upcoming legislative session.

"As the courts ignore the people's definition of marriage we need more protection to not have to violate our core Christian values," Fox told KWCH-TV. 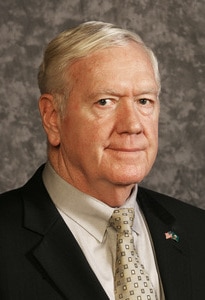 The bill passed the House earlier this year but died in the Senate after lawmakers were flooded with angry phone calls and emails, The Wichita Eagle reports. Some legislators — like Sen. Steve Fitzgerald, R-Leavenworth (right) — apparently haven't learned their lesson, and now they're emboldened by the arrival of marriage equality in Kansas:

He says the bill is meant to protect religious Kansans from lawsuits. He pointed to a recent case in New York State in which owners of a farm that regularly hosts weddings were fined $13,000 for refusing to let a lesbian couple hold their wedding there.

“So what you’ve got is we’ll sue you and take everything you can get unless you participate in and help us celebrate what you consider to be gravely evil,” Fitzgerald said.

In fact, Fitzgerald believes the bill should even extend to public employees, which could lead to police and firefighters refusing to help same-sex couples based on their religious beliefs:

“Should a judge be required to perform a ceremony? A question for you,” Fitzgerald said. “The basic question is regardless of your employment should you be forced, compelled, coerced, made under force of law or threat of suit, to go against your own morals?”

The fact that the bill would have extended to public employees was one of the reasons it was halted by Senate President Susan Wagle, R-Wichita, who said at the time that "public service needs to remain public service for the entire public.”

And even Republicans who supported the bill, including House Speaker Ray Merrick, R-Stilwell, have said they regret the decision and appear reluctant to revisit the topic.

Unfortunately, that probably won't stop someone like Fitzgerald from reintroducing the measure, and with anti-gay Gov. Sam Brownback at the helm, anything's possible.

As for that ruling, Fitzgerald had this to say:

“So we’re to believe that the Reconstruction Congress was anxious to spread sodomy throughout the states at the time? That was the intent of the 14th Amendment due process clause?”

Watch KWCH-TV's report, AFTER THE JUMP …