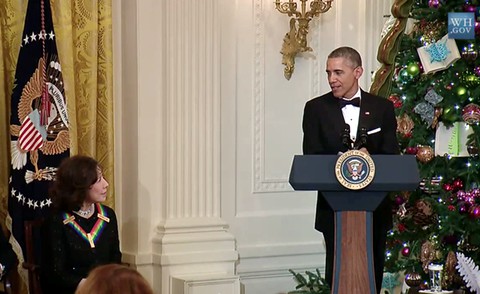 Before the event took place, President Obama offered remarks for the honorees in the East Room of the White House and Obama's humor was particularly on point. Take a look at the whole speech.

Said the President of Tomlin's tribute:

"When asked what she hoped her tribute tonight would look like, she said, 'What I’d like to see is a big stream of gay drag artists come out as Ernestine.' I haven't talked to George Stevens.  I don’t know whether this has been arranged. Although, I’d like to see it, too.  I think — "

(note: clip begins at Tomlin remarks – manually move it to beginning to hear full speech, including remarks on Green and McBride)

Previous Post: « Hannah and the ‘Girls’ Are Ready for Season 4, Are You? – WATCH
Next Post: Warm Up Your Monday Morning With Footage from Boston’s Santa Speedo Run: VIDEO »