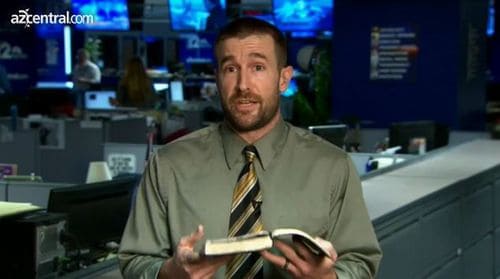 An Arizona news anchor has challenged nasty anti-gay preacher Steve Anderson on his recent call for the stoning to death of all gay people, reports the Advocate.

Anderson, who has in the past wished for death by brain cancer for President Obama, gay people, and Michelangelo Signorile, told his followers in a World AIDS Day sermon that the best cure for HIV/AIDS is to kill all gay people. Anderson also told his congregation that “all homosexuals are pedophiles.”

In an interview with Phoenix TV station KPNX anchor Mark Curtis, Anderson refreshingly doesn’t claim to not hate gay people and refers to himself as a “religious zealot.”

Anderson, pastor of the Faithful Word Baptist Church in Tempe, claims that “according to the Bible, homosexuality is a capital crime."

He masterfully avoids Curtis’s question as to whether he would want one of his own children to die if they were gay, arguing that homosexuality is a “fallacy” because people only become gay when the reject god. He admits that if he did have a gay child he would reject them.