Minnesota has become the 33rd state to adopt a formal transgender student policy after the Minnesota State High School League (MSHSL) last week voted to accept a policy that will allow transgender students to join sports teams that correspond with their gender identity, reports the Guardian.

The new policy creates a protocol to determine if someone who identifies as female but was born male can compete on female school sports teams. 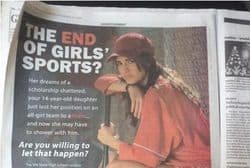 In opposition to the policy, anti-gay Minnesota Child Protection League published a transphobic ad in several newspapers which read:

"THE END OF GIRLS' SPORTS? Her dreams of a scholarship shattered, your 14-year-old daughter just lost her position on an all-girl team to a male … and now she may have to shower with him. Are you willing to let that happen?"

The same group sponsored another ad in October which asked "A male wants to shower beside your 14-year-old daughter. Are YOU ok with that?"

Anti-gay activist group the Minnesota Family Council had proposed a bylaw change stipulating that a student’s sex at birth be used to determine eligibility. However, the proposal wasn’t considered. 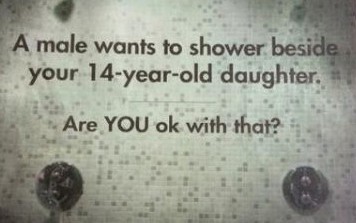 While MSHLS executive director Dave Stead acknowledged that support for the policy wasn’t unanimous among the league’s member schools, he added:

“There was nothing that was done today that would prevent a school from being a member of the High School League. Not one scintilla.”

“The passing of this will change the lives of so many transgender people who are going through hell. With the passing of this, I hope it will erase the ignorance and help people understand that trans kids are just looking for equal opportunities."

In a statement, Democratic Representative Keith Ellison rebuked those in opposition to the law:

“Too often when trans kids speak out, they’re told that they’re sick, or joking, or just plain wrong. Many of the people who opposed the MSHSL’s policy suggested that trans students might threaten other students’ safety. These depictions are bigoted and do not protect our students.”

To establish eligibility under the new ruling, students will have to produce written statements from their parents or guardians and health professionals affirming their gender identity. School activities directors will make the final decision on each application. Private schools with religious affiliations are exempt from the policy, which will take effect in the 2015-2016 school year.