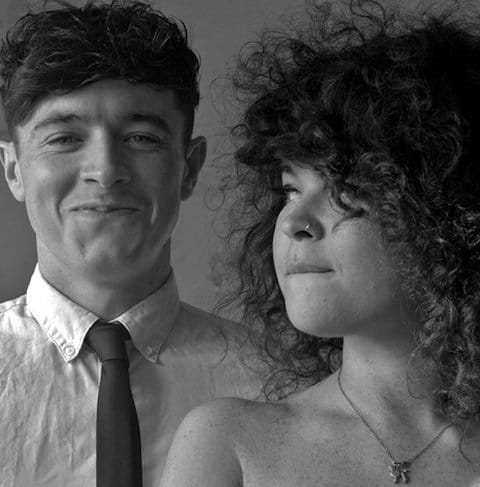 We’ve covered English pop act Bent Cousin (above) before but the twins from Brighton, England never ever fail in their quest to make classic boy-girl indie pop.

Nothing if not prolific, their latest release is a collaboration with English solo act Guiville.  Complete with sha-la-las and a wall of sound wash, it’s perfect end of year pop.

Real Lies is a trio from London, England working hard to recreate the euphoric sound of the Manchester 90s sound.

Coming on like early 90s New Order via the “baggy” excess of The Stone Roses, if you close your eyes (and you’re old enough) “World Peace” will instantly transport you back to the glorious world of The Hacienda before obnoxious EDM took over.

Have a listen to "Real Lies" and last year's "Deeper."

Listen to new tracks by Andrew Keoghan, Young Romance, The Virgance and Lost Cassettes, AFTER THE JUMP…

Andrew Keoghan is a singer-songwriter from New Zealand currently based in Brooklyn.

His 2011 debut album Arctic Tales Divide was nominated for the Taite Prize and named The New Zealand Herald’s Top Local Album that year.

“Better Company” is the breezy, faintly twee indie casio pop first song taken from his forthcoming album Every Orchid Offering, a track that points in a folktronica direction for fans of Andrew Bird.

Channeling 80s noise pop from the likes of The Primitives and The Shop Assistants, listen to two tracks from “Pale” on which vocalist Claire sounds eerily like early Kate Bush.

Nathan has worked with producer/songwriter João Caldeira Bispo, one of the regular participants in the Deadly Music! Living Sound series.

Due for release in January, Hiko Shrine is a perfect collection of nine shimmering shoegaze / dreampop instrumentals.

Lost Cassettes is a punk / post punk quartet from Huddersfield in the north of England.

The lads pretty much erupted back in January with What We Doing After?, a back-to-basics noisy EP referencing classic acts like Buzzcocks.

Just out is their new EP “Black Pool” which refines their sound, retaining punk elements but incorporating a degree of Arctic Monkeys and Kasabian swagger.

Previous Post: « Robbie Rogers Wants Chris Pratt To Play Him In The Sitcom Based on His Life
Next Post: Tom Goss Celebrates Festivus: VIDEO »