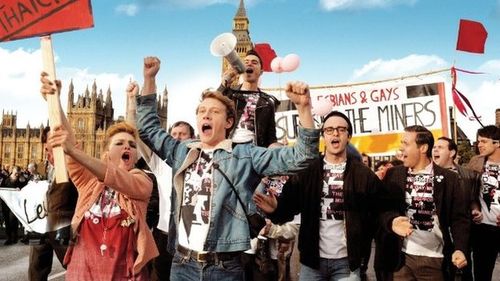 Pride, the true story of lesbian and gay activists who supported workers during the 1984 National Union of Minerworkers (NUM) strike, has been named best film at the British Independent Film Awards, BBC reports:

Accepting the top award of the night, Pride director Matthew Warchus said: "We're getting reports from up and down the country of audiences standing up and applauding. That doesn't really happen in British cinemas.

"It's just extraordinary. It's a real tribute to the source material."

Writer Stephen Beresford added that the film had one "simple, compelling message: unite".

"When I was first told the story I was blown away by it – people ask 'is that really true?'

"It took 20 years to convince anyone that a film about vegan lesbian activists was a sure-fire hit."

For more on Pride, check out our interview with director Matthew Warchus and our review of the film.