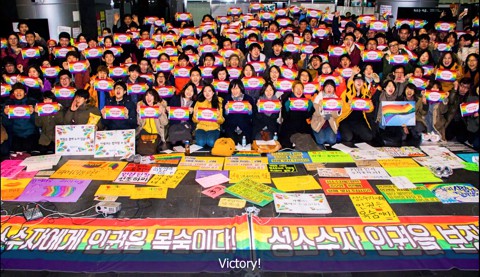 The mayor of Seoul, South Korea, has apologized for failing to proclaim a new civil rights charter that includes LGBT protections, and agreed to establish a panel to discuss ways to end discrimination, according to a coalition of activist groups.

The sit-in began when Won-soon and the Seoul Municipal Government declined to proclaim the charter on World Human Rights Day as originally scheduled, saying the LGBT protections had caused "social conflict."

In the end, at 5 PM on December 10, the fifth day of the sit-in, the mayor requested a private conversation with the protesters. Consequently, a delegation consisting of six representatives from both LGBT activist groups and civil NGOs met with him. From the start, dialogue had been one of the protesters’ demands. During the private conversation, the mayor apologized to the LGBT delegation, “It is my responsibility and fault.” Saying, “I am sorry for the emotional pain that you have suffered and will make whatever statements that you demand,” he made it clear that “This is an occasion for me to offer comfort for the emotional pain that you have suffered and to apologize to you” and, “regardless of any misunderstanding or statement, no citizen will be subjected to discrimination or disadvantage.” He also stated, “I will search for practical ways of resolving the difficulties that you suffer from.”

Rainbow Action continued its sit-in when a subsequent press release from the city and Facebook post from the mayor glossed over the issues and offered only vague apologies. But the following morning, Seoul's innovation officer met with the protesters and agreed to form a panel to work on ending discrimination in city government, prompting Rainbow Action to throw a victory party and end the protest:

Throughout the 6-day-long sit-in, the protesters were showered with support from both home and abroad. Indeed, over 300 NGOs including those for human rights, people with disability, women, civil society, laborers, and other minorities provided signatures of support in just one day. In addition, moving messages of support poured in from LGBT rights activist groups, major figures, and grassroots organizations overseas. Furthermore, countless people visited the City Hall and joined the cultural festival held every evening by the protesters. Through the sit-in, South Korean sexual minorities showed that the government and hate-mongers alike may not thoughtlessly disregard their rightful demand and movement for full social citizenship. The sit-in also served as an occasion for LGBT people in the nation to have more self-confidence and to confirm the future direction of their continued fight for justice and equality. The protesters are deeply grateful to friends and allies around the globe for their solidarity.

Watch Rainbow Action's video thanking supporters around the world, AFTER THE JUMP …