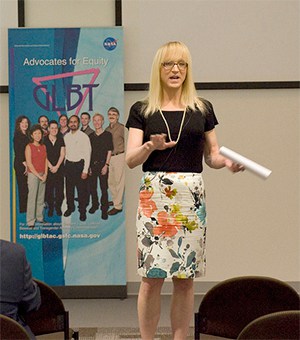 Though significant inroads have been made with lesbian, gay, and bisexual members of the U.S. military, there are still no technical protections on the books for service members who identify as transgender. Advocates like Allyson Robinson, however, are confident that the organizations like the Air Force are primed to set off a new trend in light of comments made by Air Force Secretary Deborah Lee James. Earlier this month Secretary James encouraged a review of the Air Force’s current policies that prohibit transgender members from serving:

“I would be shocked if Secretary Hagel doesn’t take just a moment in the weeks that he has left in office to make good on a promise that he made to the troops. He needs to order the review,” said Robinson. “We have their commitment to do that — we have the commitment of Secretary Hagel himself to review these policies. And, I should add, I am aware, from my conversations with leaders at the Pentagon, that the secretary views this, views those words, as a promise, as a commitment to the service members.”

Officially the White House has yet to release a position on whether or not trans-identified individuals are welcomed in the armed forces. When asked however, spokespeople for the White House pointed Buzzfeed to the Department of Defense.

“I can confirm that for you that no review of the department’s policy has been ordered,” asserted Pentagon spokesman Nate Christensen. He later guided the press to Defense Secretary Chuck Hagel’s comments to The Washington Post this past May on Private Chelsea Manning in reference to his current thinking on the trans-service issue.

“I think that this period of Secretary Hagel — sort of, lame-duck period — represents that best opportunity that we’ve had so far to get [significant change] done,” Robinson explained, pointing to former Defense Secretary Leon Panetta’s action on same-sex benefits at the end of his military career.

“He did that, I think primarily, because he felt it was his responsibility to take care of his troops. He also did it out of a sense of collegiality to the person who was going to follow him. He took, what were seen by some as difficult or contentious issues, and took them off the table so that his successor would be able to start with a clean slate.”

Previous Post: « Towleroad’s Top 10 Plays and Musicals of 2014
Next Post: Russell Tovey Shares His Thoughts on Sex with Jonathan Groff, Rim Jobs, and His ‘Well-Received’ Ass »