Toledo City Council voted 12-0 today to approve House Bill 300; a bill that expands upon Ohio's current hate crime laws to include crimes committed against people because of their actual or perceived sexual orientation, gender identity, or disabilities reports The Toledo Blade. The push for the new legislation comes a month after the brutal mid-day assault on notable Ohio transgender activist Candice Rose Milligan that left her with severe injuries including a broken jaw. Milligan, who still has her jaw wired shut from the attack, praised the council's decision in a public address yesterday. 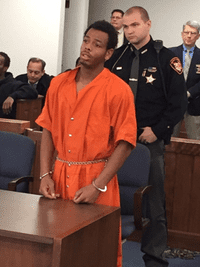 Toledo Councilman Jack Ford and three other council members are also credited for their adamant backing of the bill, which only received one hearing on the floor at the time of Milligan's attack. Milligan faced her attacker, 20-year-old Christopher Temple, in court on Nov. 20. Temple is charged with robbery to inflict, attempt to inflict, or threaten serious physical harm on another. David Crafts, the executive director of Equality Toledo, praised Toledo police's handling of the case thus far.

"We know she was targeted based on her transgender status and her gender expression, and we have no question about that. We also know that Toledo Police have procedures they must follow in order to classify cases, and they are doing the best they can to make sure this is classified appropriately."

Temple, and two other men, attacked Milligan in broad daylight in Toledo last month, hurling homophobic and transphobic slurs and epithets toward her before slamming her onto the ground. Toledo police are still searching for Temple's two accomplices in the attack.