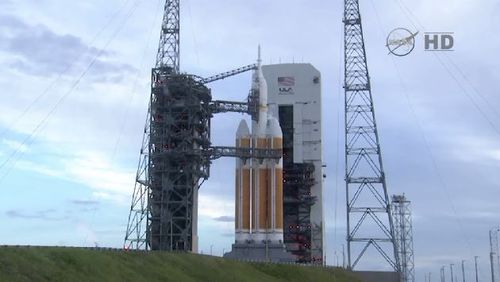 NASA's Orion spacecraft is set to have its first test flight this morning from Kennedy Space Center in Cape Canaveral, Florida. If the test flight proves successful, the next-gen space capsule is expected to one day carry astronauts to the moon, asteroids, and Mars.

The planned 4.5-hour mission — known as Exploration Flight Test 1, or EFT-1 — isn't carrying people. It's an uncrewed flight, meant to check critical systems that can't be fully tested on Earth, including the craft's heat shield and parachutes.

The data gathered from more than 1,200 sensors will be factored into the construction of more flightworthy Orion spaceships, with the aim of flying astronauts for the first time in 2021. If NASA holds to its schedule, the cone-shaped spacecraft would send crews to a near-Earth asteroid by 2025, and to Mars and its moons starting in the 2030s.

"We're now on the way to Mars, and that's what's most important," NASA Administrator Charles Bolden told NBC News in advance of liftoff.

The launch was scheduled a little after 7 am (ET) but has been delayed due to high ground winds.

Watch the launch, AFTER THE JUMP…

UPDATE: NASA has scrubed the launch for today and will try again on Friday morning. More at NPR here.

Previous Post: « Transgender Protections Added to Toledo Hate Crime Laws After Brutal Assault On Transgender Woman
Next Post: Could Trans Protections In Miami-Dade County Be A Death Knell For The Right-Wing Bathroom Myth? »