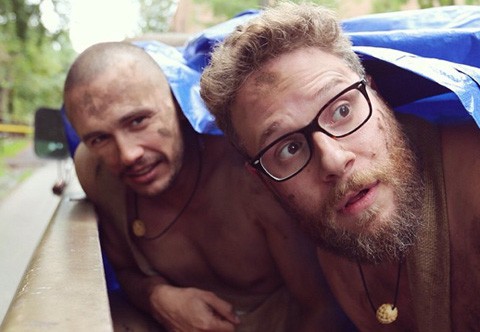 — It’s a big weekend for James Franco fans. The multi-multi-hyphenate hosts Saturday Night Live with musical guest Nicki Minaj 11:30 p.m. Eastern on NBC. On Sunday, he strips down and heads into the woods with his buddy Seth Rogen for a very special episode of Naked and Afraid 8 p.m. Eastern on Discovery.

A sexy, super twosome, Bravo's first scripted series, and more TV this week, AFTER THE JUMP …

— The CW’s two hunky titular heroes, The Flash (Grant Gustin) and Arrow (Stephen Amell) come together to battle evil in an epic two-part crossover. The action-packed event kicks off at 8 p.m. Tuesday.

— Bravo gets into the scripted game with their first series, Girlfriends’ Guide To Divorce, starring Lisa Edelstein, Paul Adelstein and Janeane Garofalo. Based on the trailer above, it looks a bit like a saucier Lifetime series, but we’ll see if it’s a hit when it debuts Tuesday at 10 p.m. Eastern.

— Now that you’ve thrown away the last of the Thanksgiving leftovers, it’s time to go full-tilt into the winter holiday season. On Tuesday at 8 p.m. Eastern, ABC premieres Toy Story That Time Forgot, a Disney-Pixar produced half-hour special that features the voices of Tom Hanks, Tim Allen and Kristen Schaal. Then, on Wednesday at 8 p.m. Eastern, NBC makes the yuletide gay with Christmas In Rockefeller Center, featuring performances from Cyndi Lauper, Lady Gaga and Idina Menzel.

— Despite its star Allison Williams’ plea to not hate-watch her performance of Peter Pan Live!, we’re sure we’re not the only ones planning to tune in Thursday at 8 p.m. Eastern on NBC just for that very purpose.

Previous Post: « While You Were Busy Eating Turkey, ‘Boyoncê’ and His Gay Friends Were Making This Fabulous ‘7/11’ Remake Video
Next Post: Thousands Resign From Finland’s Lutheran Church After Archbishop’s Pro-Gay Marriage Comments »