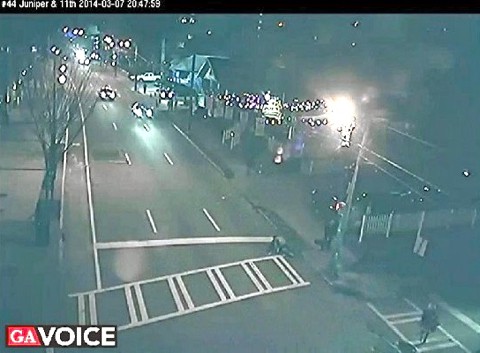 More than five years after the Atlanta Eagle raid, the Atlanta Police Department continues to fall short when it comes to protecting and serving the city's LGBT community.

According to a report from the Georgia Voice, the department has refused to adequately investigate a recent anti-gay hate crime, which police have been unable to solve despite ample evidence including video of the suspect and the identity of his accomplice.

A gay couple was walking down a midtown Atlanta street holding hands in March when a motorist began honking his horn at them. The passenger then jumped out of the vehicle and yelled a homophobic slur before attacking the couple. The suspect punched one of the victims in the head and shoved him into the street, where another motorist had to swerve to avoid hitting him. The suspect then got back into the vehicle, and the driver sped off.

The entire attack was captured on surveillance video (screen grab above), and the victims obtained video of the suspect as well as the license plate number of the vehicle. However, the driver of the vehicle reportedly told police he didn't know his passenger, and detectives haven't bothered to obtain the driver's cell phone records — or, for that matter, to publicize the crime in any way until the Georgia Voice began looking into the matter in December.

The Voice reports that the couple has requested anonymity and the story identifies the victim's boyfriend as "the witness":

“We were told they [police] talked to the guy and they said he doesn’t know the passenger, and that he picked the guy up on one block and dropped him off on another,” the witness says. “It’s crazy to me saying, ‘I don’t know the passenger in my car who beat up that guy.’ It’s just crazy, I don’t believe it.”

The couple asked the APD investigator to subpoena the driver’s phone records.

“There has to be a record of the passenger on there,” the witness says. “They said that was the end of it and they couldn’t do anything else. They weren’t able to get a subpoena." …

“I was disappointed that the investigation ended with one conversation and that’s the best they can do. I think they can do better than that, and I would encourage them to do better than that,” the witness says. “I’m not laying a lot of blame on the police department but I’m also not giving them any awards.”

The witness is being generous here. If this had been a black couple and the suspect yelled the N-word, there would undoubtedly be protests in response to the police department's apparent indifference.

The APD's raid of the Atlanta Eagle in 2009 led to a $1 million settlement with patrons, the firing of six officers and various LGBT-related reforms in the department. But apparently there's still work to do.

Watch surveillance video of the attack, as well as video of the suspect getting back in the vehicle, AFTER THE JUMP …

Previous Post: « Leelah Alcorn’s Mother on Her Deceased Daughter’s Trans Identity: ‘We Don’t Support That, Religiously’
Next Post: What a Year It Has Been: 2014 in 4 Minutes – WATCH »