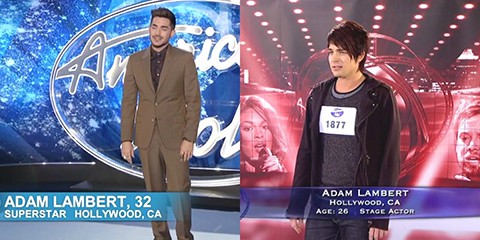 Adam Lambert's American Idol story has come full circle: from nervous audition-er to "superstar" judge. While shooting a round of auditions with Harry Connick Jr. and Jennifer Lopez for the upcoming season of the popular singing contest, Connick asked Lambert if he would be willing to recreate his original audition for the show from season 8. The current Queen frontman originally auditioned with the Queen uber classic, "Bohemian Rhapsody." Foreshadowing of things to come. Lambert took Connick's challenge and delivered a pitch perfect performance even better than his original.

Lambert has also just announced a new album that marks the beginning of a partnership with Warner Bros. music. Said Warner Bros. CEO Cameron Strang of his decision to sign Lambert after Lambert left RCA,

"The potential is worldwide superstar. He has fans all over the world. He's he's got one of the great voices and he's coming into his own as a person and as a man. He more comfortable with himself and his artistic vision of himself and I think there's a confidence and a freedom that comes with having made more than one record."

Lambert's new album will see him re-team with Swedish pop god Max Martin ("Baby One More Time") and Shellback, who together gave Lambert the hits "Whataya Want From Me" and "If I Had You" off his debut album "For Your Entertainment."

The first single is due out in April.