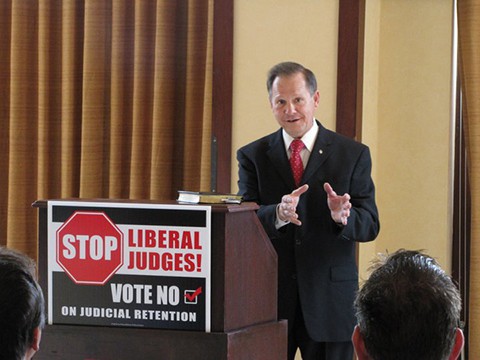 In a letter to Republican Governor Robert Bentley, Alabama Supreme Court Chief Justice Roy Moore made clear he would not recognize Judge Callie V.S. Granade's rulings declaring Alabama's ban on same-sex marriage to be unconstitutional. Said Moore, "I will continue to recognize the Alabama Constitution and the will of the people overwhelmingly expressed in the Sanctity of Marriage Amendment." Moore called upon Governor Bentley to remain stalwart against the forces of equality. Moore went on to call Judge Granade's rulings a form of "judicial tyranny." Via AL.com:

"I ask you to continue to uphold and support the Alabama Constitution with respect to marriage, both for the welfare of this state and for our posterity," Moore continued at the end of the letter. "Be advised that I stand with you to stop judicial tyranny and any unlawful opinions issued without constitutional authority."

Moore further declared, "As you know, nothing in the United States Constitution grants the federal government the authority to redefine the institution of marriage." He also called the arguments put forth by LGBT activists in favor of marriage equality, namely arguments that invoke the Equal Protection, Due Process and Full Faith and Credit Clauses of the United States Constitution, "specious."

As The New Civil Rights Movement points out, Moore had been ousted from his post as Chief Justice in 2003 following his refusal to remove a stone monument of the 10 commandments in the state's judicial building. However, Moore was re-elected to his old post in 2012.