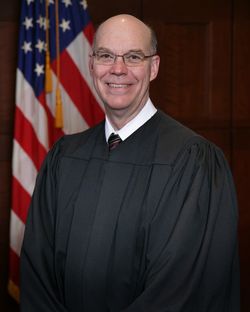 A federal judge has denied Nebraska's request to stay a lawsuit brought against it by seven same-sex couples seeking to overturn the Cornhusker State's ban on same-sex marriage. Senior U.S. District Judge Joseph F. Bataillon found that the U.S. Supreme Court's pending review of four same-sex marriage cases does not provide sufficient grounds for Nebraska to delay the lower court's consideration of a similar question. The Lincoln Journal Star reports:

The Nebraska Attorney General's office argued for a stay, saying that even if Bataillon granted the couples' request to allow same-sex marriages, the state would appeal the decision to the U.S. Eighth Circuit Court of Appeals and would seek a stay there.

But Bataillon said that was "at least premature, if not irrelevant" to whether he grants a stay. And he pointed out that the U.S. Supreme Court has denied stays in cases in circuits where same-sex marriage bans have been struck down.

In this case, the judge said the parties would benefit from a full development of the record, whatever his decision on the motion.

"Whatever public interest the state has is insufficient in light of the plaintiffs' showing of serious, irreparable and immediate harm," Bataillon wrote.

Attorneys for the couples argued that they urgently need the protections of marriage and "would suffer serious and irreparable harms should the court stay the proceedings until the Supreme Court issues its opinion."

Bataillon has set a hearing for February 19th.