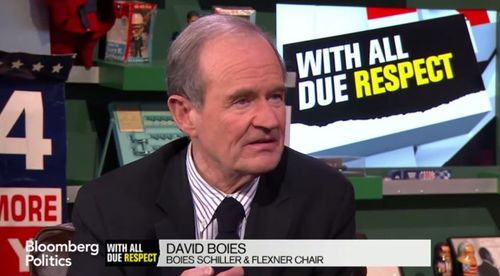 Prop 8 attorney David Boies sat down with Bloomberg's John Heilemann yesterday to go over the Supreme Court's decision to review the four gay marriage cases from the Sixth Circuit.

During the discussion, Boies shared why he thinks SCOTUS will rule in favor of the constitutional right to marriage equality:

The argument is overwhelming that there is a federal constitutional right to marry a person that you love. And 36 states have held that. Seventy percent of the American people now live in a state that has constitutional or statutory marriage equality. And the history of the Supreme Court is a history of case after case after case holding that marriage is a fundamental right —that it protects individual freedom, freedom of expression, freedom of association, that it's a basic element of liberty. And I think that the Supreme Court stepped right up to that in the Windsor case. They didn't go all the way, but you read the Windsor case and you read the Lawrence case of 10 years ago, and you can't read that reasoning and not conclude that there's a federal constitutional right to marry and Justice Scalia agrees with me—because he said that in dissent.

Boies also stated that there is no fundamental distinction between these cases and Loving v. Virginia, the Supreme Court case that overturned state bans on interracial marriage. Later, Boies was asked to predict whether he thinks Chief Justice John Roberts will side with the majority this time around in the interest of having a "less fragmented Supreme Court."