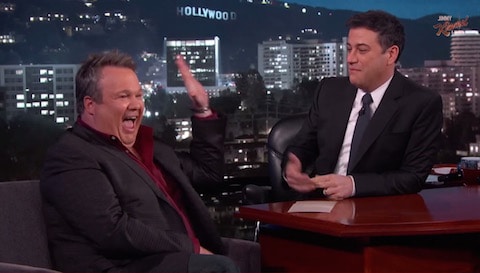 On ABC's Modern Family, Eric Stonestreet and Jesse Tyler Ferguson play the neurotic-yet-devoted gay couple of Cam and Mitchell, respectively. Off-set the dynamic is still familial, but less like spouses and more like siblings, complete with obnoxious pranks.

Speaking on Jimmy Kimmel Live, Stonestreet talked about his latest prank on his co-star that involved an online sex toy store, the Colt Power Stroker, and a delivery gone awry.

You can watch Stonestreet tell the story, including how he ended up in clown makeup and how the sex toy may have accidentally ended up at Jim Parsons house, AFTER THE JUMP…