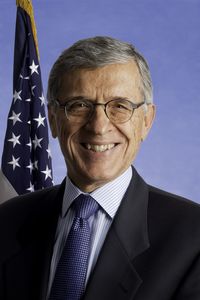 The Federal Communications Commission is expected to vote next month on net neutrality rules, The Washington Post reports:

President Obama's top telecom regulator, Tom Wheeler, told fellow FCC commissioners before the Christmas holiday that he intends to circulate a draft proposal internally next month with an eye toward approving the measure weeks later, said one official who spoke on the condition of anonymity because the agency's deliberations are ongoing. The rules are meant to keep broadband providers such as Verizon and Comcast from speeding up or slowing down some Web sites compared to others.

President Barack Obama has asked the FCC to put Internet service providers under the same rules as those imposed on telephone companies 80 years ago. The aim is to protect net neutrality, the concept that everyone with an Internet connection should have equal access to all legal content online, including video, music, email, photos, social networks and maps.

The outcome could affect the prices consumers pay for access to entertainment, news and other online content.

For a handy primer on the topic and what's at stake, you can't go wrong with John Oliver's brilliant segment on net neutrality, or as Ted Cruz calls it "Obamacare for the internet".