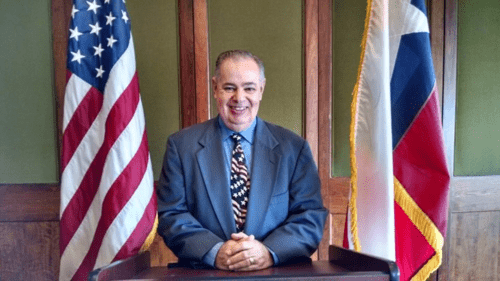 Last week, we told you how the Republican Party in San Antonio had rejected a hateful anti-LGBT resolution.

But apparently the spirit of the resolution lives on in the heart and platform of at least one GOP candidate in the Alamo City.

Nunzio Previtera (above), who advanced to a runoff for the Texas House District 123 seat in a special election earlier this month, recently told the city's daily newspaper that he doesn't believe God intended people to be gay.

“Marriage is a biblical concept,” the candidate told me. “Marriage was first talked about in the Bible. And the Bible very specifically said that marriage is between a man and woman. … My study of the Bible gives me very specific views about homosexuality. I don’t believe that God intended that to be the way people act.”

At the same time, Previtera said, “Our Lord Jesus Christ is the only person who can judge.” 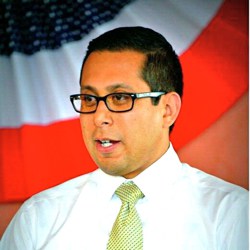 Previtera is in a runoff against former San Antonio City Councilman Diego Bernal (right), a Democrat who authored the city's LGBT-inclusive nondiscrimination ordinance passed in 2013.

Anti-LGBT groups fought bitterly against the ordinance, and after it passed they threatened to recall Bernal. Not surprisingly, Previtera is attacking Bernal over the ordinance, and in doing so he is channeling then-Councilwoman Elisa Chan, who called gays and lesbians "disgusting."

From The Express-News' Chasnoff:

“What percentage of the population of this town does it affect?” he asked. “It’s not that important of an issue to the people of this district or even the people of Bexar County. … (The LGBT community is) very much a minority.”

Previtera applies the same dismissive logic to the rest of his criticism of Bernal on the topic.

“The federal and state laws in America and Texas already provide punishment remedies when citizens abuse other citizens,” he wrote in an e-mail. “Allowing local governments to single out ANY class of citizens for preferential treatment is Discrimination by any definition of the word.”

Previtera is endorsed by right-wing groups including the Christian Coalition of America and the Leadership Institute for Public Policy. Among its reasons for endorsing Previtera, the Leadership Institute cites Bernal's refusal to stop Terrence McNally's gay-themed Christian play, "Corpus Christi," from showing in the city, as well the former councilman's support for domestic partner benefits and his alleged failure to shut down a gay bathhouse in his district.

From the Leadership Institute:

In the summer of 2011, the obscene and blasphemous play, Corpus Christi, was showcased in the city-owned San Pedro playhouse located in District 1, an enterprise subsidized by the city. The play portrayed our Lord, Jesus Christ, and His apostles throughout the performance in lewd and prurient ways as active homosexuals. Christian organizations repeatedly presented their complaints before the City Council during the summer of 2011 requesting that the blasphemous play be canceled. Bernal, the Mayor, and the majority of his fellow councilmen refused to take any action. …

Bernal refused to respond to questions and concerns from citizens regarding the gay bath house in his district (ACI) on Elmira Street which city health inspectors avoided in spite of the city’s Metropolitan Health District office’s findings that HIV/AIDS and sexually transmitted diseases were on the rise in San Antonio primarily in the reckless sexual behavior of the MSM (men having sex with men) population.

Fortunately, Bernal is heavily favored to win the House seat in the solidly Democratic district. And once he joins the Legislature, he'll be uniquely qualified to defend local nondiscrimination ordinances against attacks by Republican lawmakers, who want to ban them and enshrine a "license to discriminate" in the state Constitution.

As for Previtera, he'll go back to his insurance business, Integrity Insurance Agency, but we suspect he may lose a few clients.