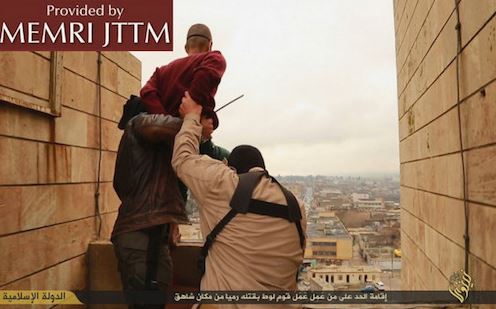 The Islamic State (ISIS) has released a series of images showing two men being thrown to their deaths off a building in Ninawa, Iraq for being gay, the Middle East Media Research Institute reports.

One of the graphic images shown is of the second man plunging to his death, with the body of the first man visible on the ground surrounded by a large crowd of on-lookers. Other images show two thieves being shot from behind while crucified and a woman being stoned to death for alleged audultery.

Captions on one image refer to the man pictured above as having been convicted of the practices of the “people of Lot,” a euphemism for sodomy.

Fox News’ Shepard Smith has a short breakdown of the released images which you can watch AFTER THE JUMP…(warning: graphic)