If you need evidence of the growing divide on LGBT issues within the Republican Party, look no further than Michigan.

On the same day that Republican Gov. Rick Snyder (top right) made headlines by calling for more dialogue on LGBT protections, a GOP state lawmaker reintroduced a "license to discriminate" bill that would take the state in the opposite direction. 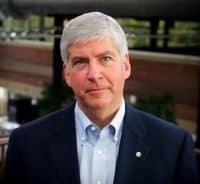 During a State of the State address marking his fifth year as governor, Snyder called for legislators to continue discussions on amending Michigan’s Elliott-Larsen Civil Rights Act. The law prohibits discrimination based on race, age, sex, religion and more, but does not offer protections based on sexual orientation.

"Let's keep up that dialogue and let's show that we can deal with issues of discrimination in our state," he said.

Perhaps Snyder should have delivered an advance copy of his speech to Republican Sen. Mike Shirkey (bottom right), who earlier in the day reintroduced the Michigan Religious Freedom Restoration Act, according to Mlive.com: 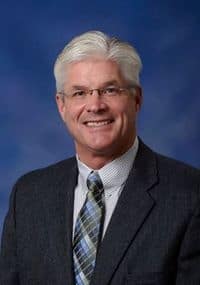 The state RFRA, modeled after a federal version, would allow individuals or businesses to seek exemptions to government regulations they feel may substantially burden their sincerely held religious beliefs.

Critics who opposed the bill last year called it a “license to discriminate” against gay, lesbian, bisexual or transgender individuals, a charge that supporters denied before a straight party-line vote in the House.

Bolger said at the time that he wanted to “strike a balance” between protecting individual rights and defending religious liberty, but the non-discrimination bill stalled in committee due to a dispute over protecting transgender residents.

Meanwhile, the "license to discriminate" bill passed the House but died in the Senate — which is where Shirkey has reintroduced it.

The Michigan bill joins a wave of anti-LGBT state legislation across the nation, and the Associated Press took a look at the trend on Saturday:

The U.S. Supreme Court will hear arguments in April and could decide by June whether gay couples can marry, and national opinion polls show U.S. voters increasingly unopposed to gay rights. Yet lawmakers in a handful of states are backing longshot legislation targeting gay rights, doubling down on the culture wars. Most, if not all, of the efforts are led by Republicans. …

If the bills' backers manage to force a sharp debate in coming weeks, and the Supreme Court rules in favor of gay marriage a few months later, supporters of the bills would be exposed to criticism that they've been fighting for a fringe issue.

"On no issue during my 40-year career have opinions moved as rapidly as they have on the issue of the morality of gay relationships and ultimately gay marriage," said Whit Ayres, a Republican consultant for Florida Sen. Marco Rubio, Tennessee Gov. Bill Haslam and the National Rifle Association. "When you have conservative organizations like the U.S. military and the Boy Scouts openly accepting gay members, the debate is close to being over."