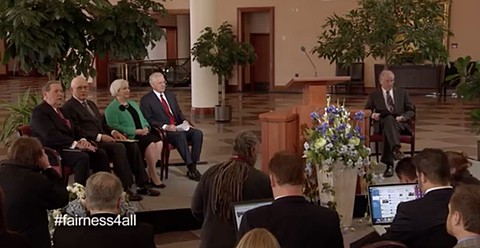 Leaders of the Church of Jesus Christ of Latter-day Saints gathered for a rare press conference on Tuesday at which they said they'll back statewide protections for LGBT Utahns in housing and employment in exchange for "religious freedom" exemptions, the Salt Lake Tribune reports:

Said Oaks in a news release:

"We call on local, state and the federal government to serve all of their people by passing legislation that protects vital religious freedoms for individuals, families, churches and other faith groups while also protecting the rights of our LGBT citizens in such areas as housing, employment and public accommodation in hotels, restaurants and transportation — protections which are not available in many parts of the country."

The shift in LDS policy appears to be the latest cog in the wheel of the religious right's attempt to reframe the conversation about LGBT rights into one in which religious people are somehow the victims and those who are seeking protections from discrimination, the oppressors.

We saw Jeb Bush blowing a similar dog whistle earlier this month in response to marriage equality in Florida. 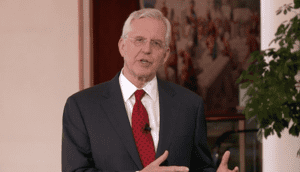 From the LDS press release:

Elder D. Todd Christofferson (pictured) affirmed that this appeal to government leaders for a balanced approach between religious and gay rights does not represent a change or shift in doctrine for the Church.

Elder Oaks said that “those who seek the protection of religious conscience and expression and for the free exercise of their religion look with alarm at the steady erosion of treasured freedoms that are guaranteed in the United States Constitution.”

And he explained: “Since 1791 the guarantees of religious freedom embodied in the First Amendment have assured all citizens that they may hold whatever religious views they want, and that they are free to express and act on those beliefs so long as such actions do not endanger public health or safety. This is one of America’s most cherished and defining freedoms. Yet today we see new examples of attacks on religious freedom with increasing frequency.”

Elder Oaks shared several of those examples. The university system in California, he said, is forcing some groups to compromise their religious conscience if they want recognition for their clubs. And in one of America’s largest cities, lawyers acting for the city government subpoenaed the sermons and notes of pastors who opposed parts of a new antidiscrimination law on religious grounds. Recently, he noted, the head of a large American corporation was forced to resign from his position in a well-publicized backlash to his personal beliefs.

“When religious people are publicly intimidated, retaliated against, forced from employment or made to suffer personal loss because they have raised their voice in the public square, donated to a cause or participated in an election, our democracy is the loser,” Elder Oaks said. “Such tactics are every bit as wrong as denying access to employment, housing or public services because of race or gender.”

It's not clear how much common ground the Mormons will find with this new campaign. The church insists it is making no changes in doctrine, and still believes it's against the law of God to have sex outside marriage between a man and a woman.

Watch the LDS press conference and an explanation of the church's announcement by Elder D. Todd Christofferson, AFTER THE JUMP…