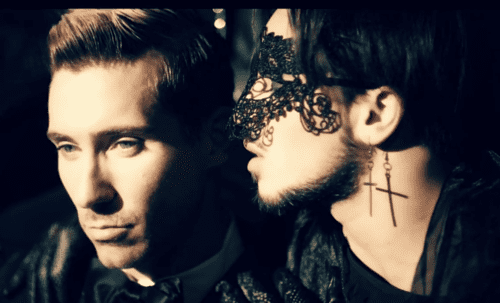 Choreographer and singer Bobby Newberry released a new music video for his single Flight From Paris exclusively on out.com featuring high-heeled dance prodigy Yanis Marshall known for his sultry, fierce high-heeled choreography. Newberry spoke with Out saying the video was shot at Beso Hollywood and that production was rather hectic.

"This video actually came together very quickly… I wrote "Flight From Paris" with Intyce two weeks before we shot the video—which is a super quick turn around. I worked with Yanis Marshall for one full day to create the choreography, and then we had two rehearsals with the dancers. The next day we shot the video it was definitely hectic."

Jonathan Burdine provided style for the video dressing Newberry in a black leather kilt and used pieces from Balmain, Céline, Dolce & Gabbana, Zara, Top Shop, vintage pieces and Burdine originals. Newberry tells out that he met Marshall in Paris five years ago when the high-heeled aficionado attended a workshop Newberry hosted. Newborn spoke about his relationship with Marshall and the choreography in the video. 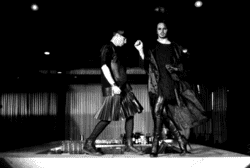 "He's been a supporter of mine from the beginning, and I think he's so talented and such an awesome person. We've been planning on working together on something for a while now and this ended up just coming together so perfectly.

"I wore boots in the video, which were actually not that comfortable, LOL (sic). Yanis was in heels the entire day, naturally. I have danced in heels many times. It's definitely fun—but not my steez."

Watch Marshall and Newberry strut their stuff in the video for Flight From Paris, AFTER THE JUMP…

Previous Post: « 12 Men Arrested In Northern Nigeria In Violation of Sharia Law Forbidding Gay Marriage
Next Post: The Church of Scientology Wants You To Know The Many Different Names For Poppers »