The New York Times has defended the decision of Atlanta mayor Kasim Reed to dismiss fire chief Kelvin Cochran following a 30 day suspension for making derogatory remarks about LGBT people in a self-published book he wrote titled Who Told You That You Were Naked? 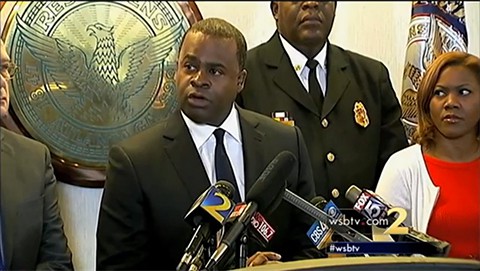 The New York Times has defended the decision of Atlanta mayor Kasim Reed (above) to fire Kelvin Cochran (below right), the anti-gay Atlanta fire chief who self-published a book he wrote titled Who Told You That You Were Naked? 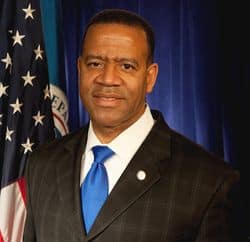 The newspaper argues that Reed “did the right thing and dismissed Mr. Cochran for what he called poor judgment: specifically, for failing to get approval for the book’s publication, for commenting publicly on his suspension after being told not to, and for exposing the city to possible discrimination lawsuits.”

“Mr. Cochran said he was fired ‘for no reason other than my Christian faith.’ But he and his sudden coterie of supporters have it backward. This case is not about free speech or religious freedom. It is, as Mr. Reed said at a news conference, about ‘making sure that we have an environment in government where everyone, no matter who they love, can come to work from 8 to 5:30 and do their job and then go home without fear of being discriminated against."

The Times argues that if Cochran “were an adherent of a religion that avowed the inferiority of white people, and that he distributed literature to that effect…he would not have lasted another day in a job that requires him to manage and protect the well-being of a large and diverse work force.”

“It should not matter that the investigation found no evidence that Mr. Cochran had mistreated gays or lesbians. His position as a high-level public servant makes his remarks especially problematic, and requires that he be held to a different standard.

“The First Amendment already protects religious freedom. Nobody can tell Mr. Cochran what he can or cannot believe. If he wants to work as a public official, however, he may not foist his religious views on other city employees who have the right to a boss who does not speak of them as second-class citizens.”

Watch a January 6th press conference in which Reed announces his decision, AFTER THE JUMP…

But the biggest and most dangerous lie the New York Times put forward is that Christians (and those of other faiths) who actually have the temerity to speak up on their beliefs (you know, don’t hide their light under a bushel) on marriage and sexuality, should be fired.

Yes, the New York Times actually states that employees "have the right to a boss who does not speak of them as second class citizens." When the Times says that we are speaking of employees as second class citizens, it lies again—of course we don't believe that—we just know that marriage is the union of a man and a woman. And even though the Times acknowledged that there is absolutely no evidence that Mr. Cochran discriminated against gays or lesbians, it still argues that he should be fired because he had the temerity to publicly acknowledge his beliefs in this book.

The Times has just declared war on Christians and members of other faith communities that serve in government position. It is open season, according to the New York Times, to make sure that we lose our jobs. The new authoritarians now state openly that we can have our beliefs—we simply can’t talk about them. And then they are going to actually have the gall to say that "this is not about free speech or religious freedom."