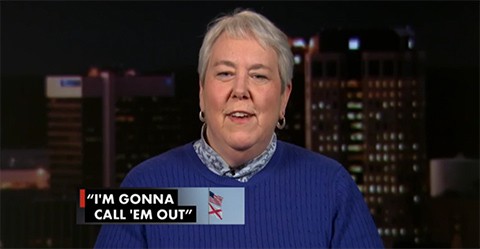 As we reported earlier this week, Alabama's first and only openly gay state legislator Dem. Rep. Patricia Todd took to Facebook over the weekend to fire back at politicians alleging that gay marriage would erode "family values" should it become legal in Alabama. Todd called out the hypocrisy of many lawmakers using the rallying cry of "family values" to prop up their anti-gay views when they are having extramarital affairs. Todd's remarks came on the heels of a federal judge (appointed by George W. Bush) ruling that the state of Alabama's ban on same-sex marriage was unconstitutional. Wrote Todd:

"I will not stand by and allow legislators to talk about 'family values' when they have affairs, and I know of many who are and have," Todd, the state's only openly gay lawmaker, said on Facebook over the weekend. "I will call our elected officials who want to hide in the closet out."

Todd was responding to comments from her fellow lawmakers after Friday's decision by a federal judge to overturn the state's ban on same-sex marriages.

"It is pretty well known that we have people in Montgomery who are or have had affairs …" Todd told the TimesDaily this morning. "I just want them to be careful what they're saying, some of it might come back to stick on them."

Todd has stuck to her message, appearing on All In with Chris Hayes on MSNBC on Tuesday night to discuss why she is going after anti-gay politicians by using their own dirty laundry against them:

"I just wanna remind [politicians who oppose gay marriage], they don’t have the corner on family values. There are thousands of gay couples across the state, many raising children, that have much stronger family values than they do. It’s an attempt to try to cool the rhetoric…if you want to talk to me of the merits of the issue then that’s fine. But I’m not going to let you get away with a five second sound bite where you condemn me and my community."

Todd also weighed in Alabama Supreme Court Chief Justice's Roy Moore's comments that he would not respect or uphold any federal judge's ruling that allows same-sex couples to wed as such decisions were "judicial tyranny" in his eyes.

Watch Todd tackle the right's hypocrisy on family values, AFTER THE JUMP…