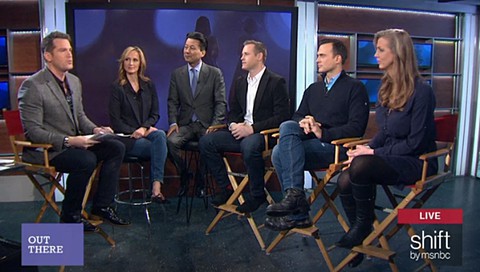 Thomas Roberts is hosting a new weekly show at Shift by MSNBC (the network's digital venture) called Out There in which he and a changing panel of guests discuss newsmaking LGBT stories.

Up for discussion were InTouch magazine's offensive cover featuring Bruce Jenner, Glee's transgender storyline, Billy Crystal's remarks on gay sex scenes, the sex on Looking, Kevin Hart's remarks this week that he wouldn't want to play a gay character because of his own insecurities, homophobia in Hollywood, marriage equality, SCOTUS, and "religious freedom".

Watch the show (in four segments), AFTER THE JUMP…