With a referendum on same-sex marriage due in May, the Union of Students in Ireland (USI) yesterday launched a campaign for a “yes” vote. 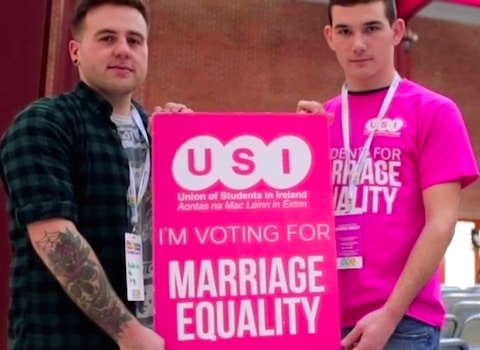 With a referendum on same-sex marriage due in May, the Union of Students in Ireland (USI) yesterday launched a campaign for a “yes” vote.

The USI has had a unanimous mandate to campaign for marriage equality since 2012.

The student group’s Vote For Love campaign notes that over 90% of students are in favor of marriage equality – compared with 79% of the Irish population as a whole.

It also points out that there are 169 points of difference between civil marriage and Ireland’s civil partnership legislation.

“Students have a once-in-a-generation opportunity to make Ireland more equal in the upcoming referendum on marriage equality.

"It is clear that students want to live in a more inclusive and egalitarian society. Access to marriage equality is a crucial part of this. USI has registered over 20,000 students to vote, and we plan to add to this number over the coming months. We know students are excited by the referendum and anxious to have their voices heard on the issue of marriage equality in Ireland.” 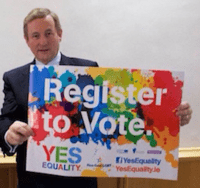 However, the USI also warns that a vote for marriage equality is not “just going to happen” and recommends that students register to vote and campaign for a yes vote.

The Irish government – including Prime Minister Enda Kenny (right) supports the referendum but has recently voiced concerns over complacency amongst voters.

As expected, the Catholic Church in Ireland has thus far been particularly vocal in its opposition to equality.

Watch a USI Students For Marriage Equality video, AFTER THE JUMP…