Peter LaBarbera, virulently anti-gay nutjob and leader of listed hate group Americans For Truth About Homosexuality, has written a poem about being forced to watch Michael Sam kissing his boyfriend 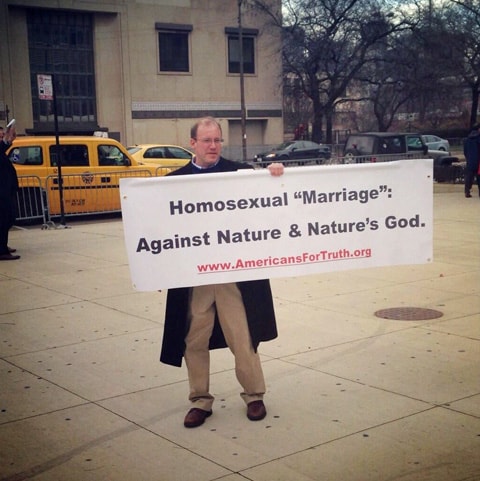 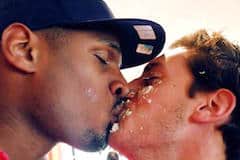 Explaining that his poem – which refers to “‘sex’ in the anus” as the cause of “so many diseases” – is just “a little fun” to usher in the new year, LaBarbera says that he has played “loosely off the lyrics, rhythm and meter of Dr. Seuss’ “Green Eggs and Ham” (you know, the one with “Sam I am”).”

As he has done so before, LaBarbera also suggests that Sam seek “ex-gay” therapy.

Keeping to the light, humorous mood, he adds:

“Public celebration of perversion is indecent – and another harmful and obnoxious by-product of ‘gay’ and ‘same-sex marriage’ advocacy. Sure, I’ll be chided by humorless homosexuals and ‘progressive’ hacks who bristle at anything characterizing homosexuality as immoral, destructive and changeable. But who cares: LGBTQ activists attack, slander and lie about AFTAH all the time anyway. So enjoy…or not. Happy New Year!”

Just to be clear – if you don’t like nutjobs like LaBarbera attacking you in public, you need to grow a sense of humor. Who cares, indeed.

The poem itself is excruciatingly bad but worth reading in full just to take in the full scope of LaBarbera’s ignorance and stupidity.

Read I Saw the Kiss by Michael Sam. It Made Me Mad. He Kissed a Man!, AFTER THE JUMP…

I saw the kiss by Michael Sam..

It made me mad–he kissed a man!

That’s something I don’t want to see

It’s wrong, unnatural, and it’s not just me.

Many now say, “Homosexuality is OK.”

He made men for women, and women for men.

So why are “gays” so prideful then?

We don’t want to see this man-on-man!

Not in a boat, not in a car

This public perversion goes too far!

Not in the store or on a bus

This same-sex stuff, it brings disgust.

Not at the movies or on TV

I don’t want my kids to think it’s right

So please, please, keep it out of sight!

Why is it always in our faces?

This sin–celebrated in so many places?

Even at football and baseball games

We have to pretend homosexuality’s the same.

When parents just wanna’ have fun and relax.

“Well,” said Michael Sam, “let me ask you this:

“Do you get mad when men and women kiss?!”

As long as there’s not too much PDA.

I disagree–it’s not who you are, it’s what you do.

Hey, haven’t you had a girlfriend or two?

Yes, but this is now and that was then.

My “sexual orientation”…hey, it’s towards men!

Can’t you see I was born that way?

You already changed from straight to perverse.

Why can’t the process work in reverse?

Many like you once thought they were that way.

But they left homosexuality behind and are now EX-gay!

Who lived as “gay” for years but then turned back.

Have left the “gay” life to follow God’s plan.

Besides, homosexuality’s not safe; you should see…

The alarming stats on MSM [men who have sex with men] from the CDC.

Is linked to the practice of gay sodomy.

Sure, the PC sports writers will all say

They couldn’t be happier that you’re “gay”

Some have compared you with the great 42.

But he broke the color barrier;

Homosexuality’s just a sin people DO!

I do not mean to pick a fight

When I say most Blacks don’t think homosexuality’s a “civil right.”

Must I put this in a song?

Michael shot back: “Not wrong at all, it’s who I am!

“God made me black and blessed me with gayness.”

Blessed you?! Then why are so many diseases linked to “sex” in the anus?

“You’ve chosen to believe a lie!”

You can’t change your skin color, that’s a fact.

But homosexuality? That’s only an act.

And conduct we don’t want to see–at all!

Not on a train, or at the mall.

Not at the beach or in the gym.

Don’t be a poster boy for sexual sin!

We don’t want to see your “gay” kisses.

But I will pray for you, Michael Sam.

If you believe in Jesus and turn from your sin,

Just remember, it’s God, not man, we answer to.

And He’s prepared a virtuous path for you.

No, He can’t bless your same-sex behavior.

But He’ll give you an “abundant life” with the Savior.

And no “hate” here–just God’s people’s love for the lost.

A price was paid for my sins and yours, at great cost.

Thanks for the chat,

I hope you see…

That you and I can disagree

Without me hating you, or you hating me.