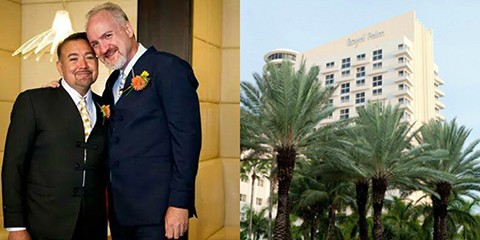 With same-sex marriage now legal in Florida, out celebrity chef Art Smith has announced he will be joining forces with the James Royal Palm Hotel in Miami to throw a special wedding officiated by a mystery celebrity on Saturday, February 21st for 101 lucky gay couples, NewTimes Miami reports:

The event, coinciding with the South Beach Wine & Food Festival, where Chef Smith cohosted the Big Gay Ice Cream Social, will feature food by some of Miami's best chefs, a party with a celebrity DJ, and a special cake created by Duff Goldman, star of Food Network's Ace of Cakes.

The first 101 couples to tweet to @ChefArtSmith using #101GayWeddings will be invited to participate in the free wedding, complete with a celebrity minister to officiate the ceremony. Although the officiant has yet to be announced, it was assured that the person will be a "really big name."

Each couple will be able to invite two guests to share the big day. Couples do not have to be Florida residents to enter but will have pay for travel to Miami if they're from out of town.

An afterparty, in lieu of the Big Gay Ice Cream Social, is also being planned, with proceeds benefiting local LBGT charities. More info when that's announced.

Smith married his partner back in 2010 at the Lincoln Memorial in Washington, D.C.