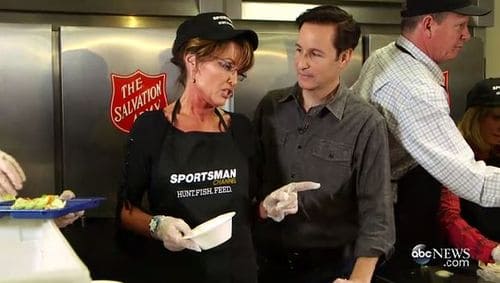 Speaking with ABC News' Neal Karlinsky while dishing out wild boar chili to homeless in Las Vegas Thursday, Sarah Palin served up a side of word salad for her thoughts on the 2016 presidential election:

We can't wait for new energy. Good competition. And that competition in the GOP primary, 'cause this had better be a competition, and not a coronation, will surface that candidate who can take on, I predict, Hillary. Be ready for Hillary and show the nation what it's going to take to get the country on the right track. We can't afford status quo. Status quo, lately, has been lacking. We're getting screwed. And status quo's got to go.

Palin, who resigned as Governor of Alaska in 2009 instead of finishing out her first term, added that "of course" she's interested in the 2016 race because of her "servant's heart". ABC News noted that when Palin was asked again if she was interested in actually running in 2016, she said: