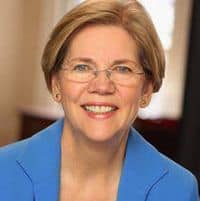 Last week, Sen. Elizabeth Warren (D-Mass.) again spoke out against the FDA's new blood donation policy —  accepting blood from gay men, but only those who have been abstinent for at least one year.

Through Twitter, Warren called for concrete, alternative methods of ensuring blood safety, challenging the FDA to shake up the status quo.

The FDA must commit to building a bigger, safer blood supply through risk-based screening & have courage to set policies based on science.

This statement is in line with the recent letter, signed by 80 congressional Democrats including Warren, which called for "risk-based blood donation policy," and stated:

The pertinent scientific question is not whether a cross-section of the population is more likely than another to transmit an infection, but rather whether an across-the-board, risk-based screening will reduce the likelihood of all infectious contaminations.

In related news, the FDA released a statement this week saying it had considered individual self-assessments, but did not find them reliable:

"Assessment of high-risk sexual behaviors would be highly burdensome on blood donation establishments and potentially offensive to donors."

John Aravosis over at AMERICAblog has some colorful commentary on the FDA's recent response:

So to recap, the FDA believes that a total stranger asking a man if he’s gay — a highly personal, and for some embarrassing, admission that could get you fired from your job, and disowned by your family — is not “offensive.”

Nor is it offensive to ask a gay man when the last time is he screwed another guy.

But if you ask a straight man whether he’s monogamous, how non-monogamous he is (how many different partners he’s had), and whether he use condoms during intercourse, suddenly the FDA becomes a collective prude.

I try not to over-use the word “homophobia.” But the FDA’s response to this mess is deplorable, offensive, and homophobic.

What do you think of the one-year deferral policy and the FDA's handling of the situation?