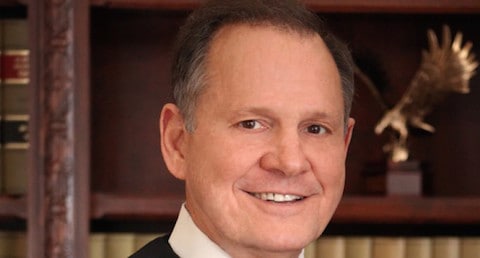 Alabama Chief Justice Roy Moore really, really dislikes gay marriage. We reported this week on how he's calling for the governor of Alabama to resist "judicial tyranny" and refuse to comply with a federal judge's ruling overturning the state's same-sex marriage ban. Well, that call for resistance has inspired the Southern Poverty Law Center to file an ethics complaint against Moore, with SPLC President Richard Cohen saying,

Moore is once again wrapping himself in the Bible and thumbing his nose at the federal courts and federal law. As a private citizen, Moore is entitled to his views. But as the chief justice of Alabama, he has a responsibility to recognize the supremacy of federal law and to conform his conduct to the canons of judicial ethics.

The SPLC article also points out that Moore is not a good student of history, not even his own, as ethics violations a decade ago stemming from his refusal to comply with a federal court order to remove a Ten Commandments monument from the state judicial building resulted in a lawsuit from the SPLC that culminated in Moore being removed from the bench. He was re-elected to his position in 2012 – because evidently Alabamans would rather have someone who panders to petty beliefs than is dedicated to doing the entirety of his job – but if Moore continues down this path he may once again find himself on the losing end of a lawsuit and once again removed from his job in even more disgrace.

He'd better hope he's not cheating on his wife while he's at it.

In related news, AL.com is reporting that certain campaign ads for Moore's 2012 campaign were created by video production company All Good Creatives – owned by none other than Cari Searcy, one of the plaintiffs in the lawsuit that overturned the state's gay marriage ban.