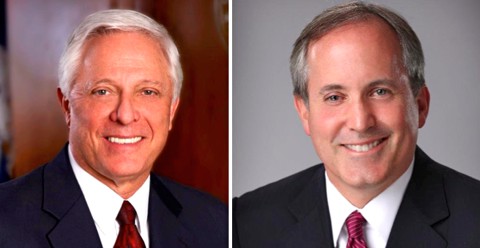 Republican attorneys general in Louisiana and Texas say they plan to keep fighting even if the 5th U.S. Circuit Court of Appeals stirkes down bans on same-sex marriage in the two states.

As we've reported, such an outcome appears likely based on oral arguments, assuming the 5th Circuit decides to rule rather than waiting for the Supreme Court to settle the issue.

Through the democratic process, Louisiana citizens have previously voted to establish this definition of marriage and to add it to the state’s constitution.

Louisiana's Attorney General prevailed at the trial court level and was the first attorney general in the nation to win on this issue. Today's appearance was in support of the trial court's favorable decision.

Attorney General Caldwell said, “I was joined at counsel table today by constitutional law experts Kyle Duncan and Mike Johnson, both of whom I retained to assist my office with this important task of defending our constitution, which is the expression of the will of our Louisiana citizens.

"As I've said previously, as Louisiana’s attorney general, I will do everything in my power to uphold the will of our citizens and the right of states to manage their own affairs.”

Texas Attorney General Ken Paxton (above right), who was sworn in this week to replace GOP Gov.-elect Greg Abbott, also posted a statement:

“In 2005, Texans overwhelmingly supported a constitutional amendment defining marriage as the union of one man and one woman," Paxton said. "I am committed to defending the Texas Constitution, the will of our citizens and this sacred institution.”

Mississippi's attorney general and governor have been less outspoken about defending the state's marriage ban, saying only that they believe it's their duty to defend state laws, and I was unable to find statements from them about oral arguments. Their apparent silence may reflect the growing trend of resignation to marriage equality even among conservative Republicans, who recognize it's a losing cause and no longer politically advantageous. 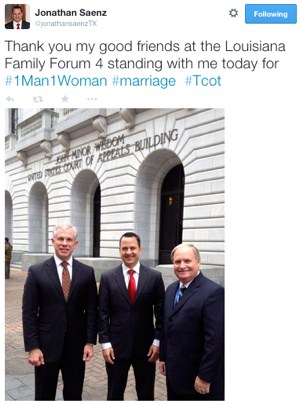 For example, neither Texas Gov. Rick Perry nor Gov.-elect Abbott, both Republicans who've vigorously defended the state's marriage ban in court and elsewhere, had anything to say about Friday's hearing. Moreoever, there didn't appear to be any organized anti-gay presence outside the courthouse in New Orleans — the site of a historic hearing on same-sex marriage in the heart of the Deep South. Instead, the opposition was represented in the media by a smattering of well-paid anti-LGBT operatives, such as Texas Values President Jonathan Saenz (right).

But it appeared Saenz, whose wife famously left him for a woman, was determined to compensate for the poor turnout with some over-the-top rhetoric. From Talk Radio 1190 AM in Dallas:

Advocates call it a matter of equality, but Saenz disagrees.

"Redefining marriage equals private businesses being forced to fund and participate in an issue that's not even settled by the Supreme Court," he says.

"Marriage between one man and one woman has such a long tradition that it’s measured by millennia, not centuries or decades," he says.

More from Saenz in OneNewsNow:

"The tradition, until recently, had been adopted by all governments and major religions of the world," notes Jonathan Saenz of Texas Values. "That's how settled the issue of marriage has been in our country and in our world. And in Texas we dealt with this issue before and settled it at the polls the way it should, when voters voted 76 percent in 2005.

Saenz contends, "It's really a shame that all of that legitimate work could be undone by the stroke of a pen of a few federal court judges, but I think that a lot of people and a lot of legal experts believe and agree that the federal Fifth Circuit Court of Appeals will rule in favor of state marriage laws. That will be for Texas, that will be for Louisiana and Mississippi, and that will be a significant turning point in the debate and the discussion on this issue."

Saenz adds that homosexuals claim equality as the overpowering argument, but in states where same-gender "marriage" is legal, it is used as a battering ram against Christians and Christian-owned businesses. He suggests that is hardly equality.