Slowly, but surely, the May 1st release date for Marvel’s next ‘Avengers’ film draws ever-nearer, and the film studio is hell-bent on keeping the hype going with its latest trailer. If you’ve been paying attention the trailers leading up to this, some of the details are going to sound a little familiar. Ultron, voiced and motion-captured by James Spader, raids the Avengers’ Tower with a squad of Ultron drones warning Tony Stark that “Everyone creates the thing they dread.” 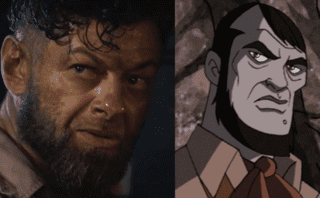 Of course, there are lots of Chris Evans glamor shots and a few glimpses of Mark Ruffalo chewing up the scenery, but the most interesting tidbits in this trailer happen at the 0:32 and 0:53 second marks. We’re briefly given a glimpse of a muscular black woman with a shaved head along and a much clearer shot of Andy Serkis, who is rumored to play Ulysses Klaw, arch nemesis of the Black Panther.

Who the black woman is exactly isn’t clear, though her hairstyle and build hint at the possibility of her being one of the Dora Milaje the Black Panther’s sister. Naturally, this is all speculation, but 'Age of Ultron' would be the ideal time to begin setting up characters for Marvel’s recently announced 'Black Panther' film.

Previous Post: « Why There Should Have Been No Stay in Today’s South Dakota Marriage Ruling
Next Post: Thousands Break Into John Lennon’s ‘Imagine’ At Paris Unity Rally: WATCH »