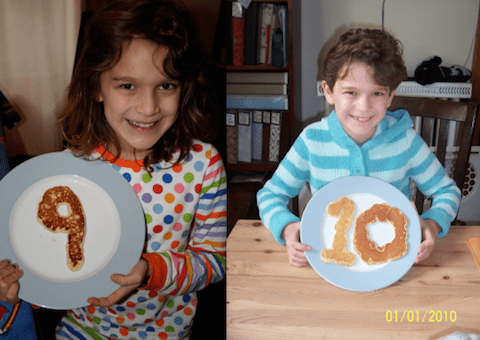 Every year Milo gets special pancakes from his parents on his birthday, marking a new year in his life. On his tumblr he decided to share pictures of the event from ages 2 to 15, his current age, though his motivation wasn't to brag about cool parents, at least not entirely. Milo's purpose for the photo montage was to show that he was born a she.

And he wants to share a message of hope with other trans kids out there. On the tumblr post he says (sic throughout):

some little girls aren't little girls it just takes us a while to realize it. […] For every kid feeling like I was, please just wait, just wait cause one day you'll realize just how worth it the wait was. I know everyone says it, but it's true, it will get better, just please stick around so you can see it come true.

Buzzfeed also secured a short interview with Milo, and when asked about advice for parents of trans kids, he simply said:

Buy them new clothes, respect name changes – parents are the biggest influence no matter what anyone says. Just be positive, please.

You can see the photo montage and follow Milo on his tumblr account at the amusingly-titled oh-look-its-satan.tumblr.com.

Previous Post: « Harry Styles Asks Niall Horan if He Can Sit on His Face
Next Post: Club Doorman Assaulted In Philly Gayborhood: VIDEO »