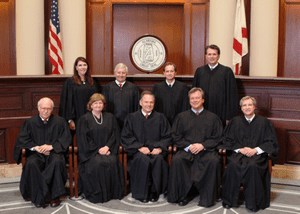 Chief Justice Roy Moore, who has been the most outspoken in advising probate judges not to issue same-sex licenses, was the only justice not listed as taking part in Friday's decision.

"This request before the Alabama Supreme Court is nothing but an attempt at delaying the happiness that all families deserve – a last-ditch, failing effort to stand in the way of the love we've seen in this historic week," Equality Alabama chairman Ben Cooper said in a prepared statement. "The petition should be dismissed, and all probate judges in every corner of the state should follow the law."

The court's order stated the briefs by probate judges, due February 18, should address issues raised by the petition, including whether the state Supreme Court even has jurisdiction to hear the petition.

Previous Post: « Some Helpful Tips For Being A Good Top on Valentine’s Day: VIDEO
Next Post: This Valentine’s Day the Benham Brothers Want You to Know Satan Is Behind Your Gay Marriage: AUDIO »